Even without dairy and oil, this WFPB Sweet Corn Chowder is oh so thick, creamy, warm, and comforting. It's also a colorful treat for the eyes with its red-skinned potatoes, celery, corn, red pepper, and green onion.

This chowder recipe was initially inspired by a non-plant-based corn chowder recipe by Chef Billy Parisi. This "Creamy Rustic WFPB Sweet Corn Chowder" recipe is completely oil-free, dairy-free, and includes no animal products. It makes about six 2-cup servings as a main meal or about twelve 1-cup servings as a side dish. It's simply perfect for fall and winter weather but could certainly be enjoyed throughout the year!

This recipe does require a little prep work but prepping ahead of time will make the relatively easy cooking process so much more enjoyable! I love to play some of my favorite music while I'm measuring ingredients out and doing my chopping and slicing. It makes this prepping step so much more fun and relaxing!

Here are the ingredients for this recipe (see details in the recipe card below):

Begin by preheating a large (at least 6 quart) pot to medium heat. Lower the heat to medium-low and add the diced onion, celery, red pepper, and a pinch of sea salt. Stir almost constantly until the onion turns translucent (about 5-6 minutes). You're not trying to brown the onion here, you're just cooking them through. Next, add the minced garlic and stir for just one minute more.

Pour in the cream sherry

After you've sauteed the garlic for about one minute, bring the heat back up to medium and add the cream sherry. You'll continue to saute over medium heat for about 2 minutes. Most of the alcohol of the cream sherry should be cooked off while leaving its sweet and toasty flavor behind.

Add the corn, potatoes, and broth

Begin to thicken the soup

Once the potatoes are cooked through and easy to pierce with a fork, you'll whisk the water and corn starch together in a small bowl to make a slurry. While the chowder is still simmering, drizzle the slurry into the pot as you continue stirring. Stir for about a minute or so. The liquid of the chowder will begin to thicken a bit after adding the corn starch.

Pour in the plant milk

Next, pour in the plant milk and simmer for about 3 more minutes. You'll really see the chowder begin to change to a lighter & creamier color at this point.

Blend to a creamier consistency

Then, use an immersion blender to blend your chowder to a creamier consistency. I really like my chowder to be a balanced amount of creamy with a little bit of chunkiness remaining. Though I don't prefer large chunks of potato in this chowder, keeping some of the small vegetables partially intact throughout helps add another layer of texture and color.

If you don't have access to an immersion blender, you could carefully scoop some of the soup into a regular blender, in batches, to briefly pulse and make it more smooth.

Stir in your final flavorings

Last but not least, you'll stir in your final flavorings. These include salt (or salt substitute), black pepper, vegan Worcestershire, and Franks Red Hot sauce. Just a little bit of each of these ingredients completes the dish nicely. This is a very small amount of hot sauce for this recipe so it just adds a very subtle kick without being too spicy.

Finally, remove the chowder from the heat and allow it to cool a bit before serving. Garnish the Creamy Rustic WFPB Sweet Corn Chowder with a bit of sliced green onion just before serving. The green onion adds more flavor and another layer of color to this lovely chowder.

Taste the chowder and add a bit more sea salt or salt-free seasoning, to enhance the flavor, if desired. Enjoy! 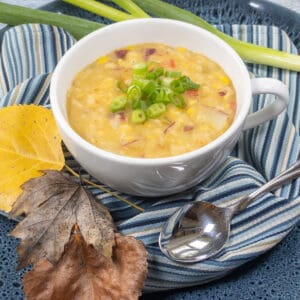 A Whole Food Plant-Based (WFPB) dietary lifestyle includes a wide variety of "whole" (minimally processed) plant-foods (i.e. foods as close to their natural state after growing from the ground, without extensive processing in a factory). Plant foods include vegetables, fruits, whole grains, legumes, nuts, and seeds. These plant foods are the healthiest foods on the planet! They're full of fiber and other nutrients while most are also low in calories. So, there's no restrictive calorie counting needed. You can truly "eat the rainbow"! Learn more...