If you have never had "nice cream", you're truly in for a treat! It's a dairy-free/plant-based ice cream that is typically made with a banana base. The frozen banana base provides a surprisingly creamy texture much like regular dairy-based soft serve ice cream. The first time I had nice cream, I was truly blown away!

There are endless ways to flavor this frozen banana base. Since nice cream is so amazing, I'll be sharing several nice cream recipes with you here on Green Circle Kitchen.

This "Cinnamon Bun Nice Cream" really reminds me of an actual cinnamon bun (think back to the amazing aroma wafting through the air near a cinnamon bun store at the mall...yum!)...but this version is entirely whole food plant-based (WFPB)! This recipe is sugar, oil, and salt-free (SOS-free), too! It's such a simple dessert or snack to throw together. In our house, this & other nice cream recipes are prepared as a special treat on a pretty regular basis.

Be sure you have frozen ripe bananas at the ready. When grocery shopping, I typically buy extra bananas just so we'll have some left over to make nice cream! Once they've become nice and ripe (brown and speckled), I peel them and place them, single layer, in a bag in the freezer. When it's time to use them for nice cream, I just break each frozen banana into about four pieces, by hand, and plop them into the blender.

Ok. So, I usually highly recommend measuring out all of your ingredients before you begin cooking (preparing your "mise en place"). However, when it comes to a recipe like this where nearly all of the ingredients get thrown into the blender, mise en place seems optional to me. I measured them out here to show you each of the ingredients...but in reality, I very often just set each product package out on the counter (to be sure I have enough of each), and measure each ingredient straight into the blender. Easy peasy!

Once all of the ingredients (not including the optional cacao nibs) are in the blender, begin blending. With my Vitamix, I use a tamper for this and bring the blender up to high-speed. It only takes a minute or two. Blend until all ingredients are creamy and incorporated nicely. Be sure not to over-blend, though, as the nice cream will become too warm and soupy. Note: if you don't have a high-speed blender, some food processors may work well for this recipe, too!

When you've finished blending, the nice cream will be a creamy soft-serve consistency.

You have a couple of serving options

At this point, you have a couple of serving options. You could serve it as a soft-serve ice cream, pour/scoop it into bowls, and enjoy it right away or you could pour it into another container, freeze it for about an hour, and then scoop it into your serving bowls, more like scoops of regular ice cream.

I chose to serve mine in the soft-serve state here & used a cake decorating bag with a large star tip to squeeze & swirl the nice cream into the bowl. I then topped it with lightly sweetened cacao nibs. However, honestly, I usually skip the fancy stuff & just scoop/pour the nice cream out into a couple of bowls to enjoy right away on its own! 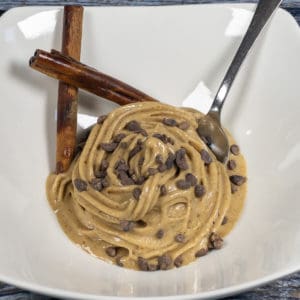 Place ingredients into the blender

Choose how you would like to serve, and enjoy!

A Whole Food Plant-Based (WFPB) dietary lifestyle includes a wide variety of "whole" (minimally processed) plant-foods (i.e. foods as close to their natural state after growing from the ground, without extensive processing in a factory). Plant foods include vegetables, fruits, whole grains, legumes, nuts, and seeds. These plant foods are the healthiest foods on the planet! They're full of fiber and other nutrients while most are also low in calories. So, there's no restrictive calorie counting needed. You can truly "eat the rainbow"! Learn more...